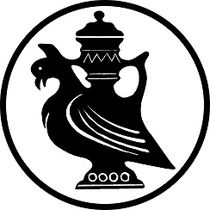 Skopinsky pottery is a traditional center of folk art in Ryazan. Fishery owes its origin to clay, which occurs in large quantities in the vicinity of the city of Skopin.

Pottery in places where the city of Skopin later appeared was made in the days of Kievan Rus. In this bowl they knocked butter, fermented the dough, stored milk, water, kvass.

Skopinsky pottery developed, like many others in Russia, producing pottery for peasant life, chimneys, bricks, tiles.

But in the second half of the XIX century, an industry appeared in Skopin, glorifying it far beyond its borders, the production of glazed figured vessels and candlesticks, multi-tiered, decorated with complex stucco molding, made in the form of an outlandish beast or with figures of birds, fish and animals.

Demand for decorative products encouraged craftsmen to make them for sale. Intricate figures were taken to festive markets in Moscow, Ryazan, Lipetsk, as well as to the cities of southern Russia and Ukraine.

They were willingly bought by lovers of "exotic" folk art, collectors, foreigners.

In 1900, the work was presented at an exhibition in Paris. In 1902 and 1913, Skopinsky products were exhibited at artisan exhibitions and were repeatedly awarded.

Skopinsky craft has always been distinguished by a wide range of products, a riot of imagination, exceptional courage of plastic solutions, original designs of vessels, candlesticks, sculptures.

Along with laconic pottery forms, vessels were made with rich stucco, depicting various birds, fish, animals, fairy-tale and epic characters.

The ornament was applied with all kinds of stamps and stacks on raw clay in the form of prints. The nature of the ornament could be both floral and geometric, but geometric prevailed.

The assortment of products manufactured at the Skopinsky field, as in previous times, is diverse.

As before, the most interesting, truly unique works - ferments, kumgans, candlesticks, sculptures, mantel clock frames are made by the authors manually on a pottery basis.

At the Skopinsky factory of artistic ceramics, a lot of research is being done in the field of new technologies, the use of new materials. 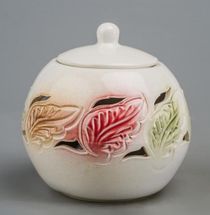 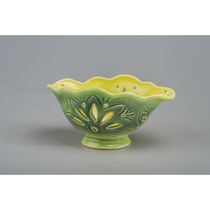 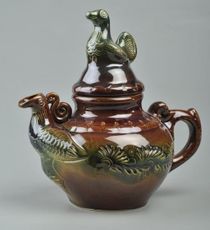 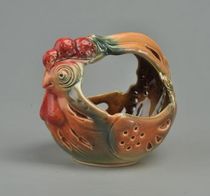 Only authorized users can write to sellers. Want to login?