On August 17, 2021, within the framework of the BRICS Business Forum, an online session dedicated to the BRICS Women's Business Alliance was held. The topic “From Women's Empowerment to Women's Leadership Development: New Ideas and New Approaches”, proposed by the Indian side, became the starting point for a fruitful discussion.

Sagnita Reddy, India Chair and Moderator, opened the session by highlighting the Alliance's work to empower women and reduce the gender gap. 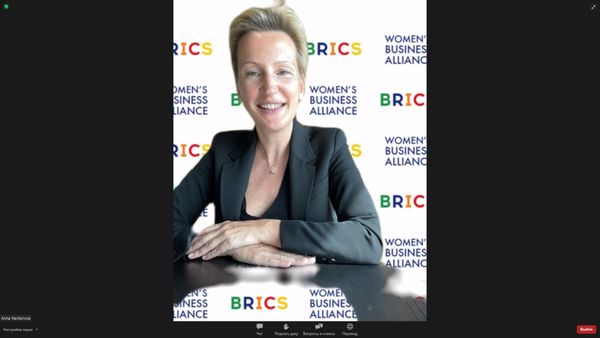 Anna Nesterova, Chairperson of the Russian part, noted that, despite a difficult year, the Indian side successfully coped with the chairmanship of the Alliance and continued to implement the activities and goals outlined in the year of Russia's chairmanship.

The speaker also stressed that cooperation between the BRICS countries continues despite the pandemic, and women's entrepreneurship has become another point of convergence of interests between the five countries.

In addition, Anna once again drew attention to the projects proposed by the Russian side. This year, Russia presented the concept and received the support of all partners in creating a Single Information Platform for the Alliance, which will become the basis for building partnerships between women entrepreneurs. The Russian side also launched cooperation in the natural farming sector, proposing the creation of the BRICS Organic Farming Association. Other initiatives of the Russian part include the development of a Guide to Fire Safety in Transport in the BRICS countries, as well as the organization of the BRICS Forum “Green Fashion” and Universal Design, which will focus on the presentation of brands and cultural characteristics of the “five” countries.

Also, the chairman of the Russian part listed other important projects being implemented within the framework of the Women's Business Alliance, proposed by India, China and South Africa.

In her speech, Anna Nesterova also drew attention to the great interest in the projects of the Alliance on the part of other non-BRICS states and stated the need to expand the format of interaction within the BRICS plus, which was stipulated in the Xiamen and Johannesburg Declarations.

The Russian part of the Alliance was also represented by Elena Chashchina, owner of the EPOTOS group of companies, a leading company in the development, production and implementation of various fire extinguishing means. Elena became the winner of the international competition of women's innovative entrepreneurial projects, organized by the Chinese side.

Tian Xian, China Representative, Lead Manager of Alibaba Local Services, spoke about the company's projects, which they are implementing, including those carried out in conjunction with the All China Women's Federation, aimed at supporting women and women's entrepreneurship in China.