The portal was presented at APEC Women and the Economy 2015 Fora: Women as Prime Movers of Inclusive Growth 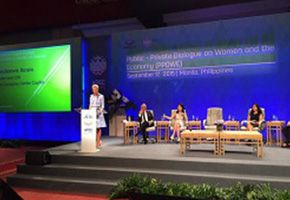 Founder, Chairman of the Board of Directors of Global Rus Trade, Anna Nesterova, spoke at the forum within the framework of the section "Young women leaders as influential drivers of change". Presentations at the same session were also made by the representatives of Canada, the Philippines and China. The session discussed how representatives of generation Y contributed to the development of their economies, introducing progressive social and economic changes. The key topic was the discussion of how women executives were able to reach heights in business, as well as sharing experiences and best practices on leadership, new business models and innovations. The main topic of Anna Nesterova's presentation was the presentation of the Mutual Trade Portal of Latin America, South-East Asia and BRICS. He will make a significant contribution to the development of Russia's international trade. The project was supported by the Ministry of Economic Development of Russia. The resource will reduce barriers to foreign trade and significantly increase Russia's export-import operations. In 2015, the theme of the APEC forum is "Women as the engine of inclusive growth". Within the framework of the event, a meeting of the Political Partnership, private-public dialogue, high-level dialogue "Women and the economy", as well as a number of individual events for representatives of the business community was held. The President of the Philippines Benigno Simeonu Aquino III, the chairman of the APEC forum, the Minister of Trade and Industry Gregory Domingo, the deputy head of the same ministry, the chairman of the APEC gender forum Nora Terrado and others, totaling 800 people attended the Forum. The founder, Chairman of the Board of Directors of Global Rus Trade, Anna Nesterova, was nominated from Russia as a Woman Icon for achievements in business within the framework of the APEC Gender Forum "Women as an Engine of Inclusive Growth" (APEC Women and the Economy 2015 Fora: Women as Prime Movers of Inclusive Growth), which was held on September 15-18 in Manila, the capital of the Philippines. Anna Nesterova was chosen by the Russian government to represent Russia in the ICONOGRAPH nomination of the gender forum of the APEC summit "Women as an engine of inclusive growth". The nominees had to achieve high results in business, public sphere of activities and make a significant contribution to ensuring sustainable economic growth and development of micro, small and medium-sized businesses. In addition, within the framework of the forum, an exhibition was opened, consisting of portraits and descriptions of the successes of 16 women representatives of APEC countries. Anna Nesterova took part in the inauguration ceremony of the ICONOGRAPH exhibition, which was held on September 16 at the Philippine International Convention Center. The opening was also attended by the chairman of the APEC forum Gregory Domingo and the head of the APEC gender forum Nora Terrado. The exhibition was organized with the aim of telling the success stories of outstanding women leaders and inspiring other women to achieve similar results. Anna Nesterova is the head of the Stock Market Committee of Business Russia, a member of the fixed income securities committee of ZAO MICEX, and is a co-chairman of the Expert Council for the Development of the Bond Market and Debt Financial Instruments under the Central Bank of Russia. Anna Nesterova is the founder and owner of the investment fund "Center Capital", which actively works on the Russian stock market. The company for several years was able to enter the ratings of the most active players on the Russian stock market. Anna Nesterova is nominated from Russia as Woman Icon within the framework of the APEC Gender Forum