The business of Vietnam began to register on the Portal 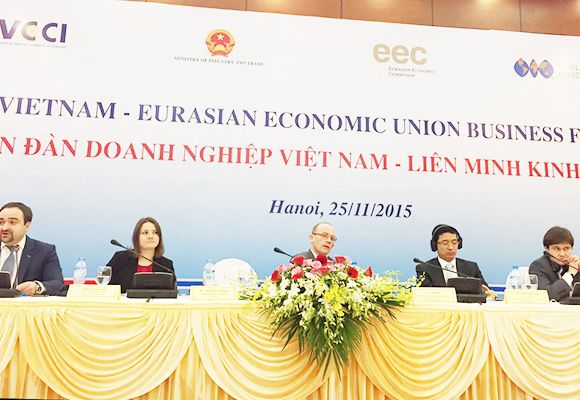 Founder, Chairman of the Board of Directors of Global Rus Trade, Anna Nesterova spoke at the plenary session of the Business Forum of the countries of the Eurasian Economic Union (EEA) and Vietnam, which was held in Hanoi on November 25. The event was held at a high level, the first deputy minister of economic development of the Russian Federation Alexey Likhachev and the deputy minister of industry and trade of Vietnam Hoang Kuok Vyong took part in it.

Anna Nesterova presented the Portal of Mutual Trade at the plenary session of the Forum. She noted that, in connection with the signing of an agreement on free trade between Vietnam and the Eurasian Economic Union (EEA), the Portal takes on special significance. Thanks to the Portal, Vietnam's integration into the trade process, in particular with Russia, will be greatly simplified and the effectiveness of interaction between the countries can increase.

Currently, there are three main barriers in the Russian-Vietnamese relations at the level of the ultimate counterparties: the language problem, the lack of understanding of the law and the norms of doing business, and the third is the lack of knowledge of concrete business, specific opportunities for companies in Russia and Vietnam. The mutual trade portal will allow each counterparty to familiarize himself with the legislative norms in the sphere of export and import. Companies can easily find each other in the range of goods, and, most importantly - they have the opportunity to barrier-free communication with interested specific employees. Thus, the site will become the connecting link that will directly help the business of Russia and Vietnam not only learn about each other, but also establish close business ties.