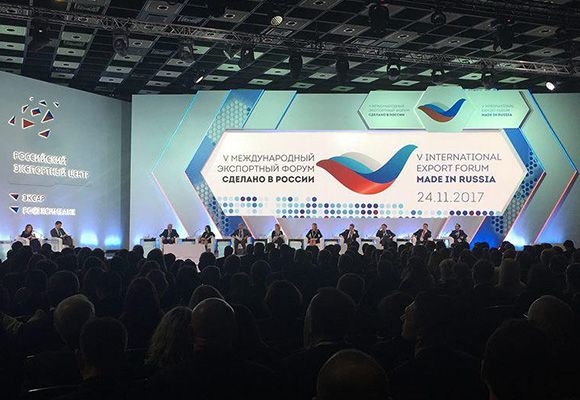 On November 24, the V International Export Forum was held on the site of the Russian Export Center. Made in Russia. Within the framework of the conference a round table was held: "Internet trade for export. Overcoming obstacles and new frontiers ". The managing director on international trade promotion of the REC Michael Mikhailov was the moderator.

The general producer of the Sreda film company Alexander Tsekalo, Deputy Director of the Department for the Development of Internal Trade, Light Industry and Legalization of the Products of the Ministry of Industry and Trade of the Russian Federation Sergey Lobanov, Chairman of the Board of Directors of Global Rus Trade Anna Nesterova, Director General of eBay in Russia Ilya Kretov, Vice President of VTB 24 Valentin Okunev, Executive Director in the Transaction Business Division of PJSC Sberbank Arsen Dumikyan and RDF Group CEO Svetlana Tvorogova.

The round table presented opportunities for Russian export of four electronic trading platforms (ETP): eBay, Business Connect (VTB 24), Global Rus Trade and Best of Partners (Sberbank). For example, on eBay of Russian goods, clothes and accessories, household goods, games, auto parts, etc. are best sold. Ilya Kretov touched upon the results of a study conducted in conjunction with Data Insight on retail Russian exports. According to their estimates, the growth potential of this segment is 20-25 times.

Sergei Lobanov told about the currently developed Strategy for the development of electronic commerce, noting that the plan for specific events is the next stage. Of the tasks facing the Ministry of Industry and Trade, the identification and involvement in the export of enterprises, raising the level of education of the population in the field of e-commerce, attracting foreign buyers to the sites. The representative of the government stressed that in the B2C sector traffic is important, while in the B2B sector there is a slightly different target audience, and this must be taken into account.

Anna Nesterova elaborated on the need to develop national electronic platforms in the country, which are promoted primarily by Russian producers and operate within the framework of Russian legislation. A member of the Soviet Council called possible financial support measures, such as subsidizing to the national ETP part of the costs of participating in events and exporters - "advanced accounts". As far as non-financial measures are concerned, the issues of cooperation with the REC are being actively worked out for the popularization of national ETPs and e-commerce in general among the producers addressing the REC. It is also important to organize an annual forum on the REC site where interested market participants can discuss existing problems, share their experience, and find partners.