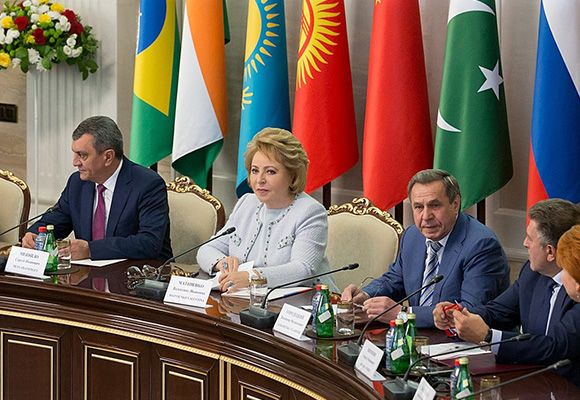 July 4 was the First International Congress of Women of the SCO and BRICS in Novosibirsk, which was opened by the Chairman of the Federation Council Valentina Matvienko. The participation was also attended by South African ambassador Nomasonto Maria Sibanda-Tusi, Deputy Chairman of the Foreign Relations Department of the Chinese Women's Federation Zhao Hongjui, Majilis deputy Irina Unzhakova. The BRICS public-private dialogue "Women and Economy" took place on the margins of the congress, in which Anna Nesterova, a member of the Presidium of the General Council of "Business Russia", Chairman of the Board of Directors of Global Rus Trade took part.

The session was devoted to the expansion of women's participation in the economy as one of the main drivers of future economic growth. For the BRICS countries, the task is to reduce barriers to the inclusion of women in the economy and create effective incentives for women's entrepreneurship.

In her speech Anna Nesterova noted that there are positive trends in the world in overcoming gender inequality. Women occupy more and more managerial positions in business: the proportion of women among business leaders in the BRICS countries is 26%, and the world average is 21%. Although, undoubtedly, there are still barriers that impede the full inclusion of women in the economy.

The existence of these barriers in the BRICS countries is also confirmed by statistical sources. According to the index of the Women Economic Opportunity Index, all BRICS countries are not included even in the first 30 points of the rating. Although the assessment of individual factors shows significant positive trends: for example, South Africa leads the way in terms of women's access to financial resources among developing countries. Anne Nesterova suggested introducing effective incentives for the development of women's entrepreneurship within the BRICS. First of all, at the moment there is no single information resource for the BRICS countries. Therefore, the creation of such a platform, which will contain information on initiatives, programs, joint events and seminars to support women entrepreneurs from the BRICS countries, is key to promoting the ideas of women's entrepreneurship.

Also, Anna Nesterova suggested creating a resource on the platform with training videos. Any woman entrepreneur on the site will be able to leave an application with a description of a specific problem and a request for a training clip on the issues raised. The most important problems and barriers will be produced by videos prepared by experts in different fields.

And for women who already have successful business within the BRICS countries, but have not yet reached the level of cross-border sales, the portal Global Rus Trade will provide preferential registration, which includes an expanded list of tools to promote products in foreign markets.