BRICS Business Forum on the Challenges of the "Fourth Industrial Revolution" 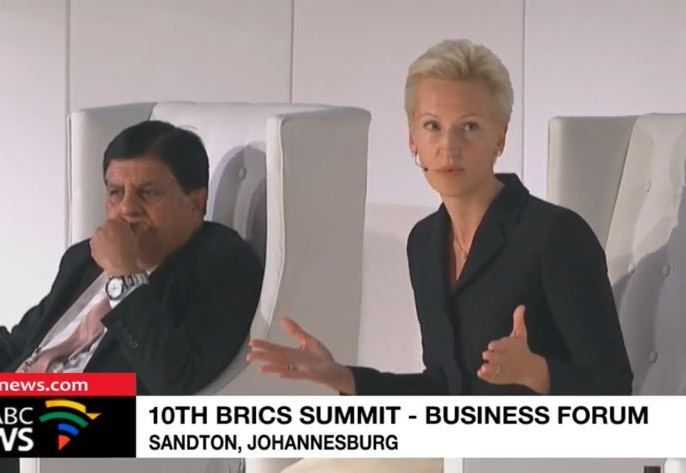 On July 25, the BRICS Business Forum was held in Johannesburg, South Africa, which opened the tenth summit of leaders and business circles of Brazil, Russia, India, China and South Africa. President Xi Jinping, President of South Africa Cyril Ramafosa, South African Minister of Trade and Industry Rob Davies, Minister of Economic Development Maxim Oreshkin, Head of the Chamber of Commerce and Industry of the Russian Federation Sergey Katyrin, First Deputy General Director of JSC Russian Railways Alexander Misharin and many others. On the section devoted to the Fourth Industrial Revolution, Russia was represented by Anna Nesterova, Chairman of the Board of Directors of Global Rus Trade.

In her speech, Anna Nesterova noted that in the era of the Fourth Industrial Revolution "automation of production, remote elimination of defects and modeling of different situations will become an integral part of any modern business." Based on the analysis of large data, companies are already exploring new markets.

One of the challenges of the Fourth Industrial Revolution, Anna Nesterova, was called job cuts. In the near future it will be necessary to retrain large groups of the population. And here business can help the state by preparing digital staff, because today low digital literacy is one of the barriers to successful employment.

The speaker stressed that "women are especially unprotected because of the need to combine domestic work and work." Even in OECD countries, only 1% of the female population is employed in ICT, while for men this figure is 5%. However, the development of the digital economy provides new opportunities, for example, remote work with flexible schedules, and accessible online training increases the professional level.

Anna Nesterova, as the head of the IT company, shared her experience of the deficit of "digital personnel" in the labor market. She considers the training of employees to be a strategically important direction of development. At the same time, in the conditions of digitalization it becomes less important where the team sits: directly in the office, in the Far East or in India. The key factors are the effectiveness of employees and creative capital.

Anna Nesterova also talked about the free educational IT project Girls solve (Girls decide), which Global Rus Trade launches in several regions of Russia. The project aims to raise the level of digital literacy of girls aged 15-18, women on maternity leave and women of age 50+. The program is based on the best practices of the BRICS countries. "Telling the girls just about complex things, we give them the right to choose a profession. We give them the right to choose in which world they want to live. We will be happy to discuss the possibility of implementing the project with BRICS partners, "concluded Anna Nesterova.