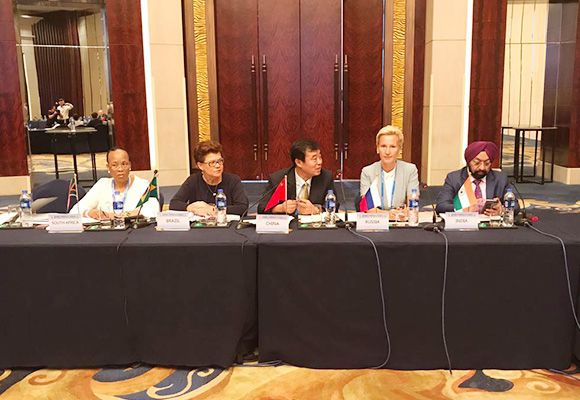 August 31 in Shanghai, a meeting of the working groups of the Business Council BRICS, which discussed the annual reports

On the working group on the development of agriculture, the Russian side was represented by Anna Nesterova, a member of the presidium of the General Council of Delovaya Rossiya, chairman of the board of directors of Global Rus Trade.

As noted in the report, in order to increase productivity, organic agriculture and the biology of agriculture are actively promoted in Russia. The introduction of advanced technologies in agriculture will not only increase the quality of manufactured products, reduce the burden on the environment, but also, in particular, will simplify the certification of products. BRICS countries should more actively exchange their achievements in the technological sphere, for example, at events such as the annual Agroprodmash exhibition - the international exhibition "Equipment, Machines and Ingredients for the Food and Processing Industry".

The representative of "Business Russia" Anna Nesterova has repeatedly voiced the idea of ​​creating a database of proven suppliers of agricultural products BRICS to facilitate international trade. Each country can create its own site according to certain common standards and with reciprocal links. Standards can relate to both the appearance of the site (for example, the general emblem, home page, location of links), and the structure and content of the site (common functionality).

At the end of her speech, a member of the presidium of the General Council of the organization expressed her wish to collect information about the structure of the working group, that is, what companies are represented and what resources they have to solve the tasks set.