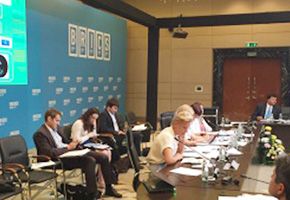 The founder, Chairman of the Board of Directors of Global Rus Trade, Anna Nesterova, took part in the IX meeting of the BRICS Contact Group on Trade and Economic Issues and the round table on support and development of small and medium-sized enterprises (SMEs) in the BRICS countries, which took place in Moscow on July 6.

Anna Nesterova's report was placed in a separate block, within which she proposed the creation of a single Internet portal for small and medium-sized businesses in the BRICS countries. She said that the development of a single Internet resource for the development of entrepreneurship in Latin America, Southeast Asia and the BRICS countries has already begun. The portal will be the first b2b-platform, which will reduce barriers to international trade of developing countries and increase mutual trade turnover.

Participants in the IX meeting of the BRICS Contact Group on Trade and Economic Issues supported the project of Anna Nesterova. The Indian side offered its assistance within the framework of the Federation of Micro, Small and Medium-sized Business, which has more than 7 million members, as well as from the Indian organization for small business support. In addition, representatives of the Government of India expressed their support and readiness for cooperation. Willingness to cooperate and exchange information within the framework of this project was also expressed by members of the Chinese and Brazilian delegations.

At the next meeting of the Contact Group, to be held in November 2015, Anna Nesterova presents the interface of the BRICS Internet portal for SMEs. It is planned to discuss possible mechanisms of cooperation between the BRICS countries with a view to filling it with relevant information.

In the framework of the meeting of the BRICS Contact Group, questions were considered on the actions of BRICS partners in the field of electronic commerce, the creation of a "single window" system for foreign economic operators, as well as the formats of interaction in the field of SMEs and intellectual property.