The portal was presented at a meeting of the BRICS DS 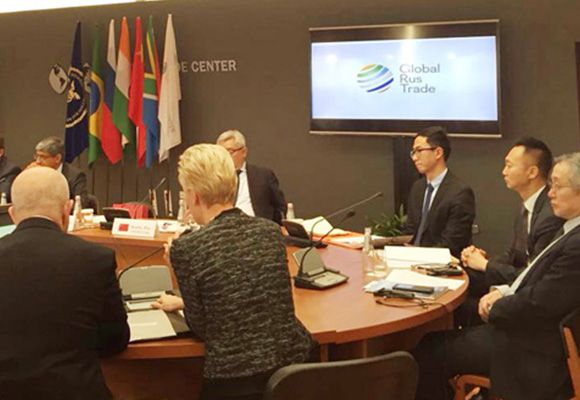 On April 6, a meeting of the BRICS Business Council took place in Moscow. During the meeting, the founder, Chairman of the Board of Directors of Global Rus Trade LLC presented the Portal of mutual trade of the Countries of Latin America, Southeast Asia and BRICS. The event was attended by the chairman of the Russian part of the BRICS DS. Katyrin, the chairman of the Indian part of the BRICS BRCS Onkar Singh Kanwar, the representative of the Brazilian part of the BRICS DS, the chairman of the Chinese part of the BRICS DS, Xu Lizhui, the chairman of the South African part of the BRICS BRian Bryan Molefe. In addition, Deputy Minister of Foreign Affairs of the Russian Federation S.A. Ryabkov, Chairman of Vnesheconombank, S.N. Gorkov, Deputy Director General for Foreign Economic Affairs of the State Corporation Rostek D.E. Shugaev, representatives of Russian Railways. Anna Nesterova spoke about the success stories of the Portal www.globalrustrade.com , about a number of successful transactions that were concluded. She noted that the Mutual Trade Portal of Latin America, Southeast Asia and BRICS is a b2b platform that allows companies from 33 countries to trade with each other, overcoming the language barrier. Anna Vladimirovna indicated that in the operational work of Global Rus Trade there are more than 120 companies, some of which are in the process of signing supply contracts. The portal connects the business of different countries, allowing them to achieve more and increase revenue. The founder of the company said: "We help companies to establish export, study business opportunities, choose countries and methods of promotion, find and attract partners and investors, hold meetings and negotiations, undertake translation and maintenance of documents, help to establish logistics."