Portal of mutual trade conquers the market of Chile 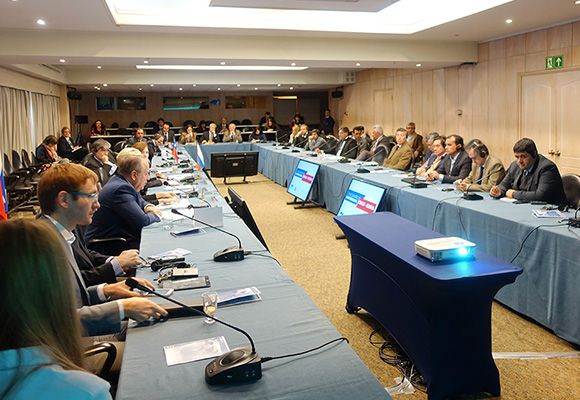 The leadership of the Mutual Trade Portal visited Chile in late October 2015. The trip was timed to the Intergovernmental Commission, as well as to the Forum, which was held in Santiago on October 29.

On October 29, a business forum Russia-Chile was held, organized by the Russia-Chile Business Council represented by Mashkova TN. (NC SESLA) and Felipe Sandoval P. This forum was the largest annual event that was visited by the largest business associations of Russia and Chile, as well as representatives of the government and business.

Founder, Chairman of the Board of Directors of the Portal of Mutual Trade Anna Nesterova noted that Russia is interested in Chilean products, but domestic companies are little informed about them. That is why joint events are important, which allow us to build bridges between the economies of Russia and Chile. Countries need to increase interaction between real business and create all the conditions necessary to increase trade. That is why the Portal of mutual trade of the countries of Latin America, Southeast Asia and BRICS has great success. The portal represents a real opportunity for businesses to sell their goods abroad.

The portal was a great success in Chile, a number of bilateral meetings were held with organizations such as SOFOFA, ASOEX, and SalmonChile. In addition, preliminary agreements were reached with the local company on the establishment of the Portal in Chile.

Business actively responded to the work with the Portal, the customers of the Portal were the companies producing dried fruits, fish, as well as development projects. In addition, initial negotiations were held with large investment companies, which are interested in both attracting and investing.