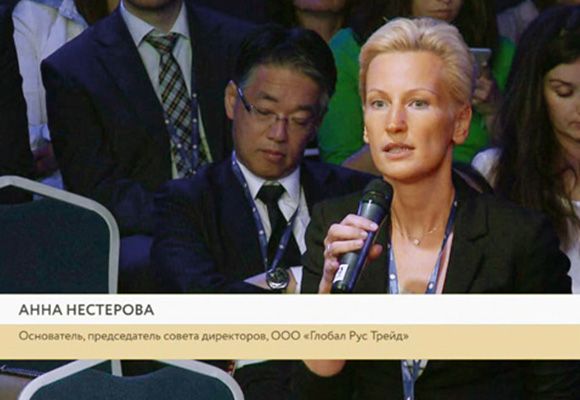 Last week St. Petersburg International Economic Forum was held in St. Petersburg. The founder, chairman of the Board of Directors of LLC "Global Rus Trade" Anna Nesterova on June 17 spoke at the televised debate "What if not oil? Russia's place in the new architecture of world trade "with a comment about the problems of Russian exporters in new markets.

First Deputy Minister of Economic Development of the Russian Federation Alexei Likhachev noted that in dollars the share of our non-primary and non-energy exports is 37% and the growth of this indicator should be at the level of 6-8% per year. Alexei Yevgenyevich also mentioned that the IT sector is also a promising area for our companies - last year exports were up to $ 7 billion. Currently, Trade Representatives, de jure 50 and de facto 55, are actively working. They support Russian exporters in more than 60 countries.

Peter Fradkov, General Director of JSC Russian Export Center, said that more than 50% of companies that apply to the REC are interested in finding a partner and establishing relations in foreign markets, 30% are interested in financing assistance, other requests are related to the decision of regulatory and organizational issues. In total, the REC processed 1,000 applications for the year of existence, 30% of which are machine building, 30% - agribusiness, 10% - services, these are areas that have the maximum potential.

Anna Nesterova noted that in Russia there is no culture of SME exports to countries beyond the CIS and Europe. Companies do not have a vision of these markets, nor an understanding of their competitiveness on them. There are no partners, budgets, marketing materials are not translated. Therefore, both large-scale support of the REC and assistance from market mechanisms, private companies that have competencies in the international market are needed. We now need to actively work with buyers from other countries.

The second factor, which is now very important, is the need to work together with the RF Central Bank, the Federal Customs Service and the Ministry of Finance to ensure the possibility of settling in the b2b format through an electronic payment system. This will allow the payment system to become a guarantor of the execution of contracts and at times simplify and speed up the transaction process. All this is already done in developed countries, through, for example, PayPal, and in China - through Alipay. Russia should not stay away from the trend of digitalization.