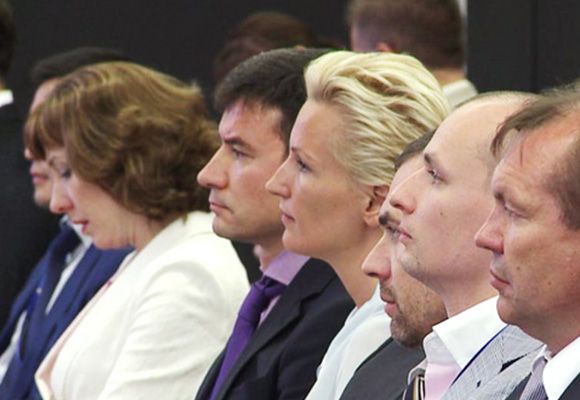 June 15 in St. Petersburg was the Russian forum of small and medium-sized enterprises "Big Demand for Small Business". Founder, Chairman of the Board of Directors of LLC "Global Rus Trade" Anna Nesterova spoke at the panel session "Financial Instruments for SME Support" with a report on the need to create a special section for SMEs on the Moscow Stock Exchange to expand financing opportunities.

The participants of the discussion noted that now banks are actively supporting SMEs through the Lending Promotion Program for SMEs. As part of the program, banks issue loans to small businesses at 11% per annum, and the average - 10% per annum. Mikhail Oseevsky, Deputy President and Chairman of the Management Board of PJSC VTB Bank, noted that the average amount of loans under this program is 190 million rubles, and 70 contracts have already been concluded for 14 billion rubles. At the same time, the bank reduced its marginality and provides loans at rates of 10% and 9% per annum, respectively. The Bank also actively cooperates with the Industrial Development Fund, Trade Representations, and also supports exporters who are interested in promoting products to the markets of EurAsEC, Europe and China. In the framework of this instrument, there are guarantees for VAT refund, lending on trade operations, a program for distributor crediting and special mechanisms for supporting subsidiaries.

Mikhail Kopeikin, First Deputy Head of the Office of the State Duma of the Federal Assembly of the Russian Federation, said that over the week of June 8-15, 5 laws supporting SMEs were reviewed. One of which, which concerns the right to independent determination of taxes by subjects of the Federation for "greenfields", has already been transferred to the Federation Council. The state helps business through the project financing mechanism, within which 41 projects have already begun financing, this has allowed to provide additional investments in the amount of 340 billion rubles. and guarantees were provided in the amount of 60 billion rubles.

Anna Nesterova pointed out that it is important not only to develop a tool for lending to SMEs, but also to create special conditions for attracting loans on the open market. International experience shows that individual exchanges for small and medium-sized enterprises have proved to be excellent. There are similar exchanges in London (AIM LSE), Toronto (TSX Venture Exchange). Shenzhen (SME Board) and in other cities. Such a platform will not only attract capital (without collateral), but it will also allow refinancing companies on bail of these securities, will give an opportunity to raise the recognition of the company, and will create prerequisites for the growth of market capitalization. This topic was already raised by Anna Nesterova at the beginning of this year for discussion within the Fixed Income Committee of the MICEX SE, as well as specific proposals are being worked out within the work of the Committee on the Stock Market of Business Russia (Anna Nesterova is the head of this committee).

The withdrawal of SMEs into a separate exchange is necessary because of a number of factors. First and foremost, it is important that under-qualified investors differentiate companies from the main quotation lists and SMEs, to which milder claims are made. This is done all over the world to indicate the relative risk of these investments. Secondly, these companies have special requirements: they must be analyzed with the help of a special authoritative institute of financial consultants. These are companies that lead SMEs through the entire process of placing on the exchange and prepare the entire deal for placement, and also monitor compliance with standards throughout the term of placement. Thirdly, in order to encourage investors to invest in such securities, it is necessary to introduce tax incentives for investors and issuers: zero income tax, preferential taxation of dividends, etc. It is also necessary that a differentiated approach to tariffs (depending on capitalization) and the number and amount of contributions has been reduced (the approach of the MICEX quotation list, the principle of "one exchange fee") can be used as a basis.

If the company was able to meet all the conditions and formed a bond program, then it may not conduct all the necessary procedures on the exchange until it chooses the established limit. This makes the cost of attracting financing cheaper.