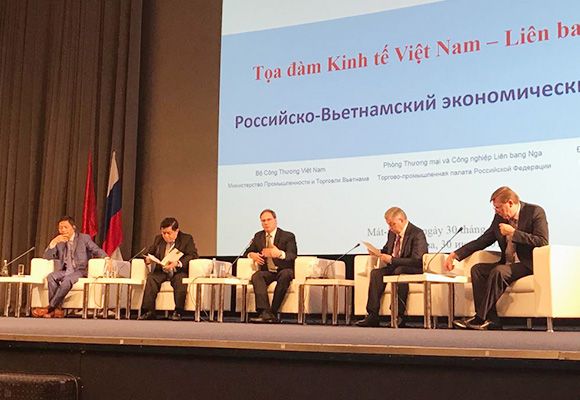 A Russian-Vietnamese business forum was held on June 30 in Moscow as part of the official visit of the President of Vietnam, Tea Dan Quang, at which Anna Nesterova, the founder and chairman of the board of directors of Global Rus Trade, took the floor.

Within the framework of the forum, a plenary session was held to discuss ways to intensify and enhance the effectiveness of Russian-Vietnamese cooperation in trade, economic and investment spheres. Also, the agenda of the event included B2B meetings between Russian and Vietnamese entrepreneurs representing companies from such sectors as agriculture, food production, light industry, mining, IT, finance, real estate, educational, logistics and medical services.

Trade-economic agreements worth more than $ 10 billion were signed on the margins of the summits. Also, $ 500 million was pledged for the development of non-oil projects by a joint Russian-Vietnamese investment fund. The entry into force of the agreement on a free trade zone between Vietnam and the Eurasian Economic Union since October 2016 created favorable conditions for increasing mutual trade between countries.

According to Anna Nesterova, e-commerce channels will be one of the key instruments for carrying out trade and economic cooperation of the 21st century. From her point of view, in the era of digitalization of the world economy, export-oriented companies of Russia and Vietnam should take into account a new technological way of doing business. In this regard, Anna Nesterova focused the attention of the business community of the two countries on the emergence of a new infrastructure for cross-border electronic commerce, including the Global Rus Trade platform.

In addition, Anna Nesterova noted the need to involve Russian and Vietnamese companies in using B2B platforms for cross-border electronic commerce, as well as conducting joint research in the field of e-commerce.