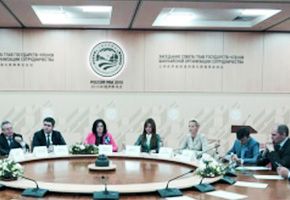 Member of the Presidium of the General Council of the Business Russia, Chairman of the Board of Directors of Global Rus Trade Anna Nesterova spoke at two sections of the Small Business Forum of the regions of the SCO and BRICS countries, which was held in Ufa.

At the round table "Digital Economy for Small Business: The Chasm or Take-off?" Anna Nesterova noted that in the digitalization of the economy, the inclusion of small and medium-sized businesses in global value chains occurs through e-commerce channels.

Especially strongly the electronic commerce channels are developed in the countries of Asia and North America: these two regions together represent up to 70% of the total electronic sales market in the B2B sector, the member of the presidium of the General Council stressed.

She also touched on the topic of including women in the economy, which occupies an important place in the development of the trend of inclusive growth. "In the conditions of digitalization of economies, electronic platforms are becoming an instrument that also contributes to the development of women's entrepreneurship," said Anna Nesterova. According to her, the initiative proposed by the BRICS for the establishment of the Women's Business Club implies the creation of a multi-lingual electronic platform.

Speaking at the section "Development of export activities in modern conditions," the founder of Global Rus Trade complained that it is often difficult for small and medium-sized businesses to enter new markets. "And the problem here is not the lack of competence or competitiveness of the products offered, but the high costs of finding a partner and promoting products abroad," she said.

As an advantage of electronic platforms, she called the low costs: "in three clicks" you can start trading with the whole world.

Anna Nesterova stressed that it is especially important for Russia to develop the ecosystem of electronic cross-border trade. "We see the high export potential of our producers, and electronic platforms should become a significant channel for promotion," she concluded.