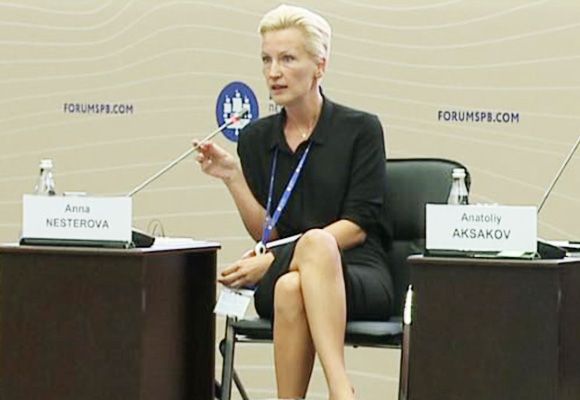 June 16, St. Petersburg International Economic Forum opened in St. Petersburg. Founder, Chairman of the Board of Directors of LLC "Global Rus Trade" Anna Nesterova spoke at the event "BRICS Business Forum: Joint Efforts to Sustainable Economic Development" with a report on the steps to strengthen economic cooperation within the BRICS bloc.

First Deputy Minister of Economic Development of the Russian Federation Alexei Likhachev noted that for 4 months of 2016 the commodity turnover between Russia and the BRICS countries grew by 6.5% in physical terms, Russian exports to the BRICS countries grew by 7.5%. The development of the road map is developing, electronic platforms are appearing - the interaction within the block is being actively improved and gaining momentum.

Dmitry Shugaev, Deputy General Director for Foreign Economic Affairs of the State Corporation Rostek, noted that infrastructure projects are one of the main areas of cooperation. In addition, the issue of granting loans for a very long period is under consideration. One of the main directions is the all-round expansion of the five exports, and an analytical center is developing within the framework of the established development bank.

Anna Nesterova noted that the BRICS unit is one of the most promising forces in the world. Combining more than 40% of human resources and more than 25% of world GDP, BRICS has every chance to become the most influential player on the world stage. Given the experience of other countries-associations, countries should act proactively and create a springboard for the further sustainable development of our economies.

Turnover of Russia with the BRICS countries in 2015 amounted to 77 billion rubles. And Russia is very interested in increasing it. Nevertheless, there are barriers that impede trade between our countries.

First, it is the need to solve the problem of mistrust between the business of our countries. Although the political relations within the BRICS are quite strong, the economic ones are not yet so active. It is very important for entrepreneurs to know how disputes will be resolved if one of the parties improperly fulfills its obligations. The practice of Global Rus Trade shows that the problems of mistrust are solved through the opening of a letter of credit in banks. But there is another problem here: one bank from Russia must take the risk of another bank from India. As the banking interaction is also not sufficiently active, such problems can be solved by attracting a third bank.

Secondly, entrepreneurs have difficulties in obtaining the necessary certificates and licenses to conduct activities inside the country and pass customs. These problems can be solved by companies that are engaged in full foreign economic activity outsourcing, they take care of all the issues on product design, including logistics and customs clearance twice: when leaving and importing goods to another country.

Thirdly, and most importantly, this is a misunderstanding of demand on the other side. For example, Indian companies do not know Russian, they are very hard to integrate. A similar situation with Russian exports - China, India, South Africa and Brazil have their partners, and for a long time it was believed that Russia exports only raw materials. The problem of lack of information can be solved by b2b marketplaces, such as, for example, indiamart.com, or globalrustrade.com. Also, it is now extremely important to create mutual interest from small and medium-sized businesses within the BRICS. First of all, this interest should be built on a good marketing analysis. It is very important that companies that analyze the market appear.