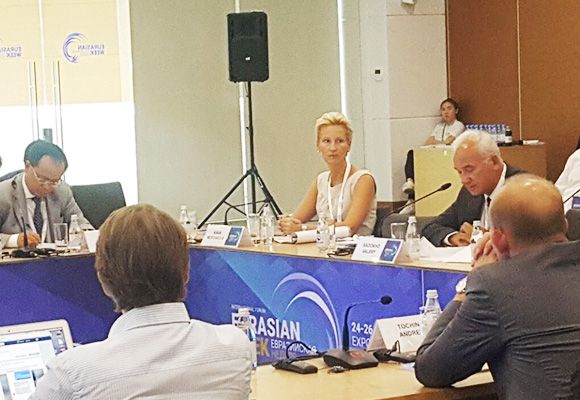 On August 25, within the framework of the "Eurasian Week" in Astana, a seminar "UNEG - Vietnam: First Business Results" was held. Trading foresight. " It was made by Anna Nesterova, a member of the Presidium of the General Council of Business Russia, Chairman of the Board of Directors of Global Rus Trade. This year, Delovaya Rossiya acted as the co-organizer of the Eurasian Week.

The seminar was moderated by Valery Sadokho, Director of the National Center for Marketing and Price Study (NCM & C). Veronica Nikishina, member of the board (minister) for trade of the Eurasian Economic Commission, Doan Thi Suan Hien, Ambassador Extraordinary and Plenipotentiary of Vietnam to Kazakhstan, Yury Chebotar, Deputy Minister of Economy of the Republic of Belarus, Vladimir Salamatov, and other directors of the research center "International Trade and Integration" .

In her speech, Anna Nesterova stressed that in the digitalization of the economy, electronic trading platforms (ETPs) are becoming an important tool for promoting business both inside the country and abroad. For example, Vietnam is actively using remote sales channels to enter the Russian market: 15% of companies registered with Global Rus Trade - from Vietnam, she cited the example. Russian business also finds new partners in the Vietnamese market through e-commerce sites.

Anna Nesterova singled out several key industries that could become a driver for strengthening economic ties between Russia and Vietnam. First of all, these are Russian technologies, including in the IT sphere, and construction materials (geogrid and geogrid, for example, are actively used in the construction of the subway in Ho Chi Minh City). From the Russian market there is a significant interest in consumer goods from Vietnam, in particular, to food, she added.

At the end of her speech, Anna Nesterova expressed confidence in the further strengthening of economic cooperation between the Unified Energy System and Vietnam, including through the development of electronic commerce in the EEA and the cooperation of the ETPs of the member states of the association.